This gallery contains examples of early work produced during the final year of my degree course at Swansea Institute of Higher Education, my year as Artist-in-Residence at Swansea College and the fledgling years of my ambition to make a living as a painter. Having completed my residency and gained a taste for painting full-time as a painter, I started married life with a little studio in a little room in our little house. This shortly became our first daughter’s room and I moved to a cold studio (our shed) at the back of our garden. I started work as a postman, working early with the intention of painting in the afternoons. 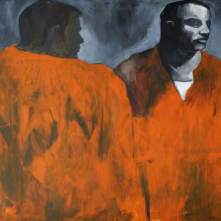 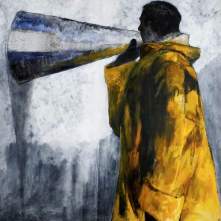 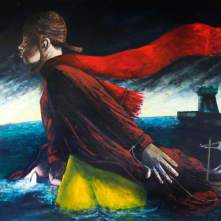 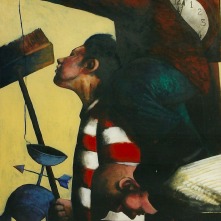 My second year at Swansea (1996) saw me initiate and develop a theme that was based on my family history. My father and grandfather had both worked underground in coal mines, my grandfather as a collier and my father as an electrician. The result of my research and dissertation was a series of images based on the miner as hero. At first I produced obvious responses to the theme, but the figures that I painted later in the year were endowed with yellow oilskin jackets rather than the traditional helmet, lamp and work clothes often associated with miners. I wanted to portray the effect that the dwindling mining industry may have on the next generation in mining areas such as Hirwaun and the South Wales Valleys, so it was important to me that I should not produce anything that was stereotypical or obviously associated with mining.

To do this, I explored artwork of expressionist artists that used symbolism as a way of communicating a different narrative. These included Peter Howson, Max Beckmann and Josef Herman (above), whose stoic images of Ystradgynlais’ working men inspired me to explore simpler shapes and underpainting. his use of glazes still influence me, his methodology appearing to be so simple yet complex in its execution.The images that appeared from this investigation helped me to produce a rich vein of paintings, drawings and prints that thankfully caught the eye of the Albany Gallery in Cardiff (Rob Newell, my tutor at Swansea, pushed me to approach the gallery).

In 1998 I won the Sir Leslie Joseph/Glynn Vivian Art Gallery & Museum Young Artist of the Year Award, which brought an opportunity to display large canvases (below) in the entrance hall of the museum. I didn’t want to enter – Rob was also responsible for making me enter. I’ve never been a fan of art competitions (mostly because I don’t enjoy losing!) and I’ve never entered one since, so it’s a good feeling to have a 100% record if you don’t include coming second in my Standard 3  junior school colouring competition.